George Marcus Reflects on Ethnography and Innovation at UC Irvine

by coled | Sep 4, 2015 | Ethnocharettes, Initiatives in our Network, Reflections on Ethnography and Innovation |

** This is the inaugural post in a series in which scholars and practitioners reflect on ethnography and innovation, with a particular focus on the University of California System.** 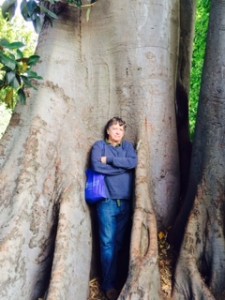 When I arrived at UC, Irvine in 2005, there was already a considerable and diverse interest in the application of ethnography to various disciplines, aside from anthropology. For example, there was (and has been) the work of Paul Dourish and Bonnie Nardi in Informatics, that of Susan Coutin, among others in Law & Society and criminology; David Snow and others in sociology; and especially for me, the work and interest in ethnography among those in the critical theory program (and especially in the now defunct Critical Theory Institute)—here the work of Gaby Schwab (writing on ethnography) and David Theo Goldberg (in a two year project on the effects of recent wars on US society) stand out. Also, the years that Etienne Balibar was at UCI were very special for cross-disciplinary collaboration involving core issues of ethnographic theory and method. There had been various interesting collaborations on a regular basis among these units. Based on this rich environment for exploring new applications and understandings of ethnography, and also on my own perceptions about how basic anthropological research had been changing in its forms from the 1990s into the first decade of the new century, I proposed the founding of a campus level Center for Ethnography, which came into being in 2005. From the very beginning it has operated as an international center, as well, for considering changes and innovations in ethnographic method, with over 300 international correspondents.

I have been the continuing director of the Center, with an active board drawn from informatics, women’s studies, critical theory, the business school, the arts, and of course, anthropology. The changing forms of collaborations, beyond the obvious condition of collaboration between ethnographers and subjects in classic fieldwork situations, was the foundational thematic of the Center, and has continued on as a key consideration and generative source of issues and projects. Collaboration is a polysemic, loaded concept in so many respects; it encourages, if not forces, partners in research to come to terms with their relationships in explicitly methodological and normative ways.

Beginning with a series of lunchtime sessions during which a variety of resident and visiting scholars were invited to reflect on collaboration in their personal histories, we moved on to a series of conferences over the years that addressed how single ethnographers, or ethnographers in diversely constituted teams, pursued new topics. “New Topics” led to a second continuing thematic of the Center: how working conceptions of temporality of the contemporary, of the emergent, of the anticipated future have come to shape ethnographic method as much as older working theories of place and historical context. A shared interest in articulating the ‘here and now’ of the speculative future is what in fact gives energy to many collaborations that shape the conditions of fieldwork and its boundaries.

A third thematic of the Center that emerged early on, and has continued, has been our interest in the changing pedagogy of method in the production of graduate research that takes an ethnographic form, exhibits an incompleteness of this form in the dissertation, and the emergence of a postdoctoral history and potential for projects that begin in graduate training.

We have been interested in bringing the collaborational environment to the fore in training, making it explicit and part of accountable method. This has not been easy. It can involve activist, explicitly interventionist ideologies of research, but not necessarily so. More important is the idea of viewing fieldwork in relation to subjects as aligned, lateral, running parallel. What kind of relationships and consequences of research do such ideas define? Early on we used terms such as para-ethnography, and para-sites. If students were ready and it seemed useful to research questions, we encouraged para-site experiments to be done alongside fieldwork. We have done six of these since the Center started—bringing subjects, ethnographers, and carefully selected attendees together to discuss certain issues or concepts that have emerged as the projects evolved, and that might be addressed in such settings. These experiments have all been interesting, risky, and I am glad to say, productive in what they generated for the projects.

In connection with the idea of para-site, and the notion of work in studio space that it suggests, Keith Murphy and I invented a pedagogical form —the ethnocharrette—to be done in relation to basic methods courses that deal with the fundamentals of ethnography and fieldwork. We have done several. The first two were all-day exercises—reading/reverse engineering selected ethnographies—by groups of students who would present their reinventions and iterations in various classic design/art studio formats, like the time-constrained pecha kucha form. More recently, we have been building ethnocharrettes into the curricula of more conventionally structured courses—for example, as the summary exercise done in a few hours at the end of a seminar for reading classic and newer ethnographies that I teach. This use of the ethnocharrette as seminar climax seems to be working very well. 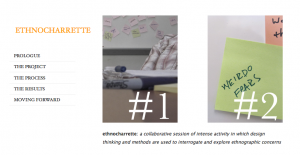 A fourth thematic of the Center that emerged around five years ago is the close examination, on one hand, of the relation/synergy of ethnographic methods with design methods—across the full spectrum of design disciplines, as well as the ideological currents of design training in design schools and institutes—and on the other hand, the relation/synergy of ethnographic methods with various methods in the arts and performance, including theatrical production and scenic design, improvisation, and participatory, site-specific art projects. This examination of the relationship of ethnography and design seems to be everywhere now (we flowed into an obvious trend of the last decade which has been much discussed and commented upon); and the basis for the consideration of the relation of ethnography to site-specific art (e.g. relational aesthetics) seems to have been already well laid during the 1990s. The art connection has been a constantly moving productive conversation here and there (e.g., most recently about the relation of ethnography to curatorial practice, which is also a specific articulation of collaborative form).

The Center has produced several partnerships and events that has explored this ‘jostling’ of ethnography between design methods, on one hand, and participatory, site-specific art methods, on the other. In my own context, this has involved since 2011 a collaboration among myself, Luke Cantarella (formerly head of scenic design in Theater Arts at UCI) and Christine Hegel, a former associate of the Anthropology Department. We have evolved modalities for three sorts of projects in which ethnography evolves in relation to art or design projects. One is a ‘second act’ for ethnography, in the production of an art/anthropology installation following the completion of a project carried out by conventional fieldwork methods (in our case, through stagings at the Center, we produced an art/anthropology installation, Trade Is Sublime, at the World Trade Organization headquarters in Geneva, in June 2013). The art/anthropology collaboration is both an outcome and a testing of ethnography’s results. A second modality is evolving as an extended ethnographic project out of a site-specific art installation (the three of us worked on 214 square feet, staged in Orange County and then extended ethnographically, and continues as a multi-sited project on social inequalities). A third modality is the intensive studio processing of an ethnographic work at some stage of evolution. Who attends the studio and works on the ethnographic material brought to it varies. We did one such project at the “Wind Tunnel” of the Pasadena Art Center, and one such project in one of UCI’s art studios.

Through such continuing collaborations—this one and others supported and sponsored by the Center—we hope to develop specific modalities which detail methodologically the vibrant relationships among ethnography, art, and design.

The Center has sponsored a number of small and large conferences that look at emerging research environments for ethnography and reconfigure older ones. The most recent and notable conferences concerning the former was one we co-sponsored on the interplay of ethnography and big data technologies, and a major conference in conjunction with the Merage School of Business on contemporary consumer culture. The most notable of the latter is a series of four workshops on “Fieldwork Without Ethnos,” one held in Montreal and two at Irvine.

Finally, the Center has sponsored conferences that mix faculty, recently graduated students, and current students to look at basic changes in the ‘classic’ model or culture of ethnographic research, especially in anthropology. From one conference, an edited volume resulted, Fieldwork Is Not What It Used To Be (2009), and from another set of meetings, we have looked at the changing senses and roles of ‘theory’ in the production of ethnography (the kind of interest in theory, for example, being quite different now than, say, during the 1990s). A companion volume, Theory Can Be More Than It Used To Be will appear in 2015.

Centre for Ethnography (University of Toronto)